Let's begin our Docassemble journey by trying a simple coding exercise: the classic Hello, World exercise that is the traditional first exercise in a new programming language.

Docassemble is a system for running interactive questionnaires. It uses several open source technologies, including Python, Markdown, YAML and docx-template to let you concentrate on writing your interviews and writing very little code. Yet, it's flexible enough to allow you to use advanced coding techniques when you need to do so.

Video version of this training​

This training was conducted live in June, 2020. You can follow along with the video if you want, or if you prefer just follow the written instructions.

Introduction to the Docassemble Playground​ 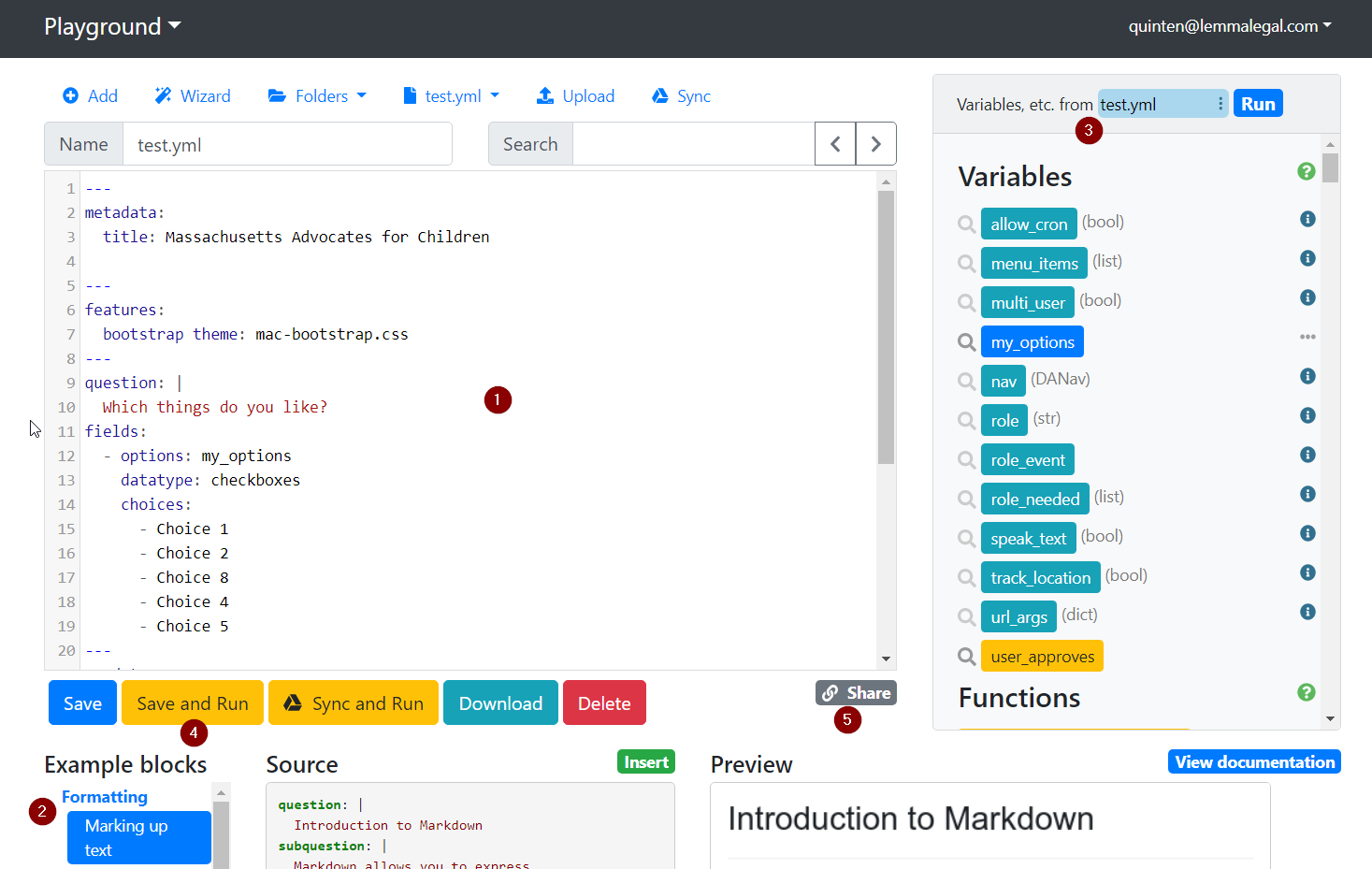 The Playground is made up of several elements.

In computer programming, the traditional first exercise in a new programming language is to display the text "Hello, World."

Let's erase the text in the playground and replace it with the text below:

When you save and then run this sample, you will notice an error.

Take a minute to read the error message. In Docassemble, your interview can contain many questions and branches that are never shown to the user. This error is telling us that none of the questions are marked as mandatory, or required, so Docassemble doesn't know what to display. Let's fix that.

The mandatory specifier marks this block as required. Now when we run the interview, we'll see the text "Hello, World" on the screen without any errors.

Note: you should normally have only ONE mandatory block in a single interview. We'll discuss good practices around this later.

The purpose of Docassemble is to gather information from the users. Let's ask the user's name so we can greet them personally.

We introduced several new ideas in this interview. Notice that each screen in the interview is separated by three dashes, like this: ---.

We introduced a new specifier, fields. Instead of single line of text, this specifier takes a list. Each field in the list is indented and begins with a single dash, like this: -. Each item has a label, followed by a colon, followed by the name of the variable that the user's input will be assigned to.

To learn more about the format of a Docassemble interview, read the section on the YAML format.

We also introduced variables. A variable is simply a placeholder. user_name is a variable that is a placeholder for the user's name. Inside the Docassemble interview, we can display a variable by surrounding it with Mako tags, like this: ${variable_name}.

Note: We don't need to tell Docassemble to mark the second question as mandatory. Because the mandatory question requires the variable user_name, Docassemble automatically asks the first question that provides a definition.